Someone recently told me the following story. 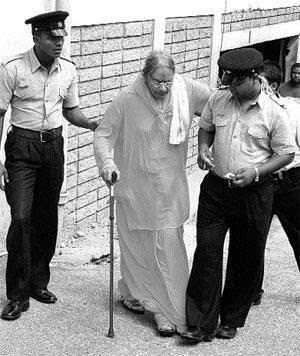 Kripalu Maharaj being arrested in Trinidad. He is using someone else's cane to fake being infirmed, as he never used one. Just another example of his dark tricks.Someone recently told me the following story:"WHen I was in Vrindaban one time, I stood on the roof of a temple over looking Kripalu's ashram. I asked the Swami next to me what the Hindi words on the ashram wall said. He said, 'Shyama Shyam Dham.' I asked him what that meant. He said, 'A dark, dark place.'"


Thousands of people follow Kripalu Maharaj with the fervor of people afflicted with obsessive-compulsive disorder. Only a few who are in deep will ever wake up, accept the truth, and get out. They are too addicted to and brainwashed by the JKP propaganda. The rest just resign themselves to the steady abuses, believing Kripalu is God walking on earth and so they must put up with everything, the abuse, monetary excesses, and sexual activities, to attain the divine world.

The sad reality is that these rabid fans are destroying their lives, and the lives of their families who want them out of this destructive organization. Meanwhile they are helping to make Jagadguru Kripalu Parishat stronger -- and darker.
Posted by Rishika (Karen Jonson) at 6:34 AM