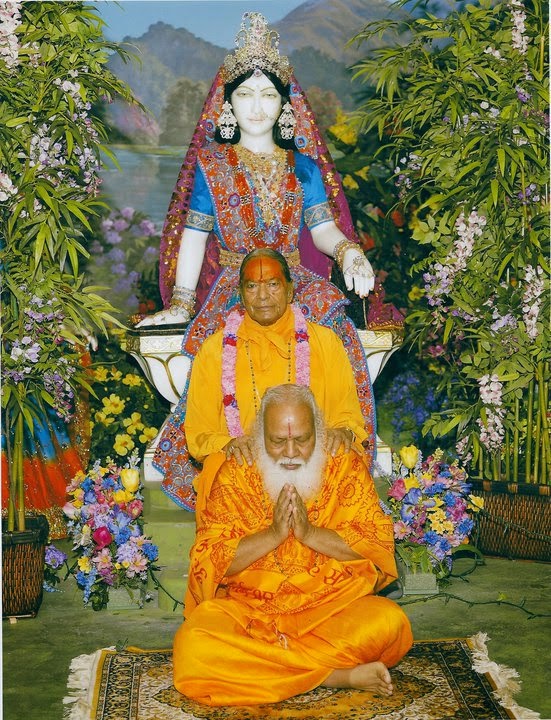 Photo taken of Kripalu Maharaj and Prakashanand Saraswati when Kripalu visited Barsana Dham in 2007. Prakashanand built the ashram, renamed Radha Madhav Dham after his escape from justice, for Kripalu, his guru for 60 years.

Prakashanand Saraswati is a notorious person among members of the transcendental meditation community who were in Fairfield, Iowa, in the 1980s. That’s when he arrived in the U.S., and tried to recruit followers away from the Maharishi Mahesh Yogi, founder of TM. In one infamous advertisement, Prakashanand even equated the Maharishi to Satan and in lectures claimed he was “bringing people into darkness.”

It was a curious comment, since he and the Maharisihi briefly shared a guru in the 1950s — the Jagadguru Shankaracharya Brahmanand Saraswati, known as Guru Dev. He was the Shankarcharya of Jyotirmath, a very prestigious religious seat in India. The Maharishi was his secretary for many years, until Guru Dev died in 1952.


Prakashanand Lies About His Past


As for Prakashanand, according to his official biography, he claims he was offered the guru’s official seat, even though he was only 22 and had known him for less than two years. What’s more, there were several official successors to the seat. Nonetheless, here’s how Prakashanand stated his version of history in his bio:

“At the age of twenty-one, in 1950, he (Prakashanand) renounced the world and went to Jyotirmath in the Himalayas. In 1951 he took the order of sanyas. Seeing his esteem of renunciation and deep feeling of God consciousness, in 1952, he was offered to be the successor of Jagadguru Shankaracharya of Jyotirmath which is one of the most renowned religious thrones of India. He very politely refused by saying, ‘My final desire is to go to Vrindaban. I have given my life for the service of Radha Rani, so I cannot live forever in the math.’”

Four years later, Prakashanand met Kripalu Maharaj and instantly became his devotee. Kripalu welcomed Prakashanand into his fledgling “spiritual” organization, recognizing a fellow conman when he saw one. The two had a love-hate relationship over the next 60 years as they both struggled to build a following. But it was all love between them when Prakashanand began bringing his devotees to Kripalu in late 1999.

Prakashanand had a relatively small following compared to many gurus who come to the U.S. However, most of his “devotees” were ready to hand over large sums of money to Kripalu, who was billed as “God incarnate,” specifically “the incarnation of Radha-Krishna,” but who cared a lot about cold hard cash — as well as the warm bodies of women and girl. Kripalu was nearly salivating as so much Western money began flowing into his coffers (India-based trusts) and helping him build massive temples, along with the many new women and underage girls he welcomed into his bed.

Notable among the most wealthy of Prakashanand’s small group of Western followers were a handful of former TMers, three of whom were minting money in the infomercial trade and giving large sums of it to the gurus: Peter Spiegel, Katie Williams, and Marsha Kent.


The two conmen’s business partnership flourished in the 2000s, culminating with the completion of the largest temple in Vrindaban, India, built by Prakashanand to glorify Kripalu. They spared no expense for the massive structure, importing marble from Italy and emerald pearl from China, among two of the many extravagances. The total bill for the building is estimated to be one billion dollars — all which was collected from followers who were told the money was going to “build hospitals.”

However, their illicit partnership was overshadowed by Prakashanand’s arrest in 2008 for molesting children who lived in is U.S. ashram, formerly called Barsana Dham (the name was changed to Radha Madhav Dham in April 2011). In March 2011, Prakashanand was convicted of his crimes, but before he could be sentenced, he ran for the border into Mexico and escaped from justice with the help of several of his followers.

A recent article in the Austin American-Statesman announced a report filed by the U.S. Marshals in September 2012 about Prakashanand’s escape into India. The details of the report were published on this blog.


Kripalu Lies about Prakashanand's Past


Twenty days after the article was published, Kripalu’s organization in India, called Jagadguru Kripalu Parishat, issued a press release denouncing all association with Prakashanand. The news article stated the following:


New Delhi, Oct.14 (ANI): A trust founded by Jagadguru Kripalu Ji Maharaj issued a statement over the weekend, refuting and rejecting suggestions and allegations of his link with wanted godman Swami Prakashanand Saraswati.


Saraswati has been declared a criminal in America, and a spokesman for the Jagadguru said that the spiritual leader was not in the habit of accepting or making disciples.


‘It is to be noted that Prakashanand Saraswati is a disciple of Jagadguru Shankaracharya Brahmanand Saraswati (a sanyasi). Jagadguru Kripalu Ji Maharaj is a family man and is a Vaishnava,’ the statement said.


According to the trust, several people in India and abroad claim to be their guru’s disciples, impressed by his actions and his ‘irrefutable devotion towards god.’


‘Under such circumstances, creating a misconception, and thereby, deluding the public by saying that a wanted criminal is his disciple or associated with any of the trusts functioning under his guidance, is definitely a condemnable action,’ the trust statement said.

This proclamation is, of course, a complete lie — easily refutable by anyone with an Internet connection. For example, use the Wayback Machine to find all the old website content such as this page.

The only person “deluding the public” is Kripalu himself, who has a very dark history, chronicled in my memoir, Sex, Lies, and Two Hindu Gurus — How I Was Conned by a Dangerous Cult — and Why I Will Not Keep Their Secrets.

Interestingly, but not surprisingly, at the same time as the release of the U.S. Marshal’s statement, the Radha Madhav Dham website deleted the last remaining evidence that Prakashanand had founded the ashram, including removing his books from the online bookstore.


No Love Between Criminals


Kripalu and Prakashanand are notorious historical recreationists -- spouting whatever nonsense fits there needs at the moment. What Prakashanand’s devotees think of this latest fraud perpetrated by Kripalu is anyone’s guess. They’ve shown a history of being in lockstep with the utterances of both deceptive and dangerous con men.

And, in fact, they’ve swallowed the new lie hook, line, and sinker as shown on a childish Facebook page where they *suddenly* started announcing that Guru Dev was actually Prakashanand’s guru. This cult would be a complete joke if it wasn’t so dangerous.

Learn more about the truth of Kripalu and Prakashanand — partners in crime for 60 years — in my book www.sexliesandtwohindugurus.com.
Posted by Rishika (Karen Jonson) at 11:54 AM