The Abusive, Criminal Nature of Kripalu Maharaj is Self-Evident forThose Who are Not Blinded by the Lies 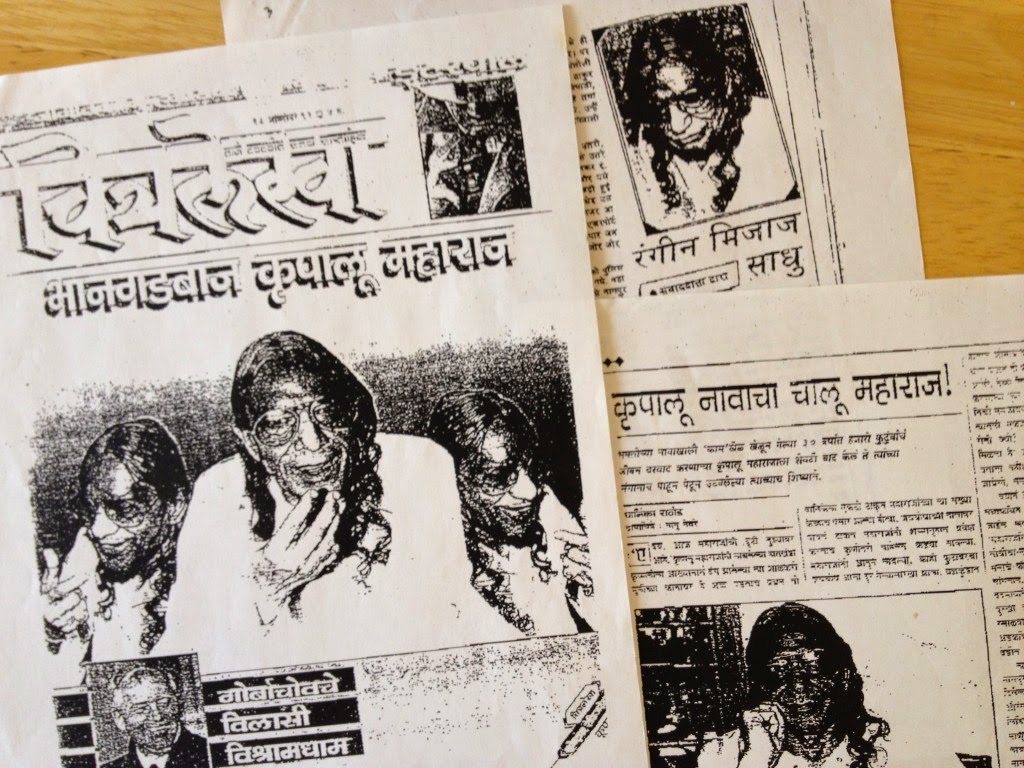 There is so much proof of Kripalu Majaraj's criminal and abusive nature and his long-running spiritual con game. I have presented all I have found on this blog and in my book -- "Sex, Lies, and Two Hindu Gurus." But there is no end to the excuses people will make if they don't want to believe the truth, because they want to believe the fantasy.

Last week, I received another request from someone asking for help to get a friend out of the clutches of Jagadguru Kripalu Parishat.

I would love nothing more than to save another soul from this abusive, criminal cult. However, the power of this organization to lure in certain vulnerable people and keep them there, like many other cults, is sometimes insurmountable.

Simply stated, if a person wants to believe what JKP is selling, there is no proof on earth that can convince them otherwise.

Often during a dialogue with a distressed person, who is anxiously looking for a way to save their friend or family member from JKP, they ask me for "proof."

For example, the person who wrote to me last week at one point wrote:


“I’m helpless at this point because it is very very very difficult to make her understand all this. Can you provide me with any SOLID proof, you can save someone’s life. Please help.”


I hate being in this situation, because I understand this dichotomy oh so well. There is already plenty of proof — but the person simply does not want to believe it.


I too was once someone who believed beyond a shadow of a doubt that JKP (then called the International Society of Divine Love and Divine Love Mission) was the “only true path to God”  — which is one of JKP’s deceptive catch-phrases.

As I wrote in my book, Sex, Lies, and Two Hindu Gurus, at one point I even saw a letter written by concerned former members of Siddeshwari’s group of followers in Oklahoma. They were trying to warn others about the possibility of their daughters being raped if they traveled to Kripalu’s ashrams in India.

I tore up the letter and tried to forget about it. Why? Because it contradicted the reality that I wanted to believe.

I wanted to believe that I was on a pure spiritual path that would ensure my ascension to God’s divine abode before I died (this is the key promise held out like a carrot on a stick by Kripalu and his gang).

It wasn’t until I experienced Kripalu’s sexual activities in his darkened bedroom, witnessed many other disturbing incidents, and began listening to more and more women’s and girls’ stories of sexual abuse, that I was finally able to open my eyes — and accept the painful truth.

Not only is Kripalu not God, he is the diametric opposite of God.

Once I opened my formerly blind eyes and brainwashed mind, I accepted all of the overwhelming proof that already existed about Kripalu — people’s shared stories, the newspaper articles, and the documentation of his arrests for rape.


How Much Proof Does Someone Need?


On January 12, 2013, someone going by the name “Inquistive Soul” wrote the following comment on one of my blog posts about a woman's first-hand story of sexual abuse:


There is no proper evidence against shri kripalu ji…… why r u blaspheming him … it is very sinful…. if u have any proper evidence like video then only u can expose….. what happened in the case of Nityanand of south….. but i know u don’t have any… their is no worth of just listening from anyone …..

Followers will always boost their leaders no matter how corrupt they may be, as far as philosophy is concerned no pious man will claim himself as God as Kripalu does, it’s a very big deviation from shastra and by common sense one can understand that God can not be arrested and taken into prison house. Like above there are many stories from many many people I heard, everything can’t be fake.

I am from South I know about Nityananda and his followers, like you they also say those videos are morphed and fraud videos. For a believer, any true evidence will become fake since he/she is implicated in that way. But those people who were insiders who came out and suffered so much will understand how dangerous cult it was.

Even though for a moment if we assume no cases are there against Kripalu, but still we can’t accept him on the grounds of shastras since he claims himself as God and don’t have any Guru which is mandatory as Lord Krishna Himself said. He proclaims that Kashi Vidvat Parishat has given him Jagadguru title but no one from Kashi Vidvat Parishat came forward and defended Kripalu when he had been arrested.

THERE WON’T BE SMOKE WITHOUT FIRE.


Sriganeshji could not be more correct when he says, “For a believer, any true evidence will become fake.”

Even if I had hundreds of videos of Kripalu engaging in his sexual activities with women and girls, those who don’t want to believe the truth would say all of the videos are fakes.

Or, as in the case of the person I was exchanging emails with last week, at one point the person wrote this about the friend, who said this:


"Even if all what you stated is true she is ok with it, because god cannot be wrong."


This comment exposes yet another reality of the JKP con game — even with all of the irrefutable proof in the world, a die-hard believer is only going to say, “So what? He’s God. His actions are divine.”


Proof that Kripalu is a Con Man is All Around You


Yesterday, on April 8, 2013, Sobhuji posted the following comment on the same article:


You can’t get any evidence like a Video or something reg So called fake Gurus… Once you enter inside their empire ur trapped. There are thousand numbers few innocent blind follower n few cunning culprits..they wud brain wash you or live u no where. Even politicians, business tycoons, celebrities work and support them.

People should open up their eyes and understand the Indian philosophy, it no where says God demands money for aarati, money for Sadhana, money for everything.. Even a small organisation spend some money for advertising his products to gain more money .. Same way these money making guys do some charity (hospital, school) as a part of advertisement strategy to expand their business, in return make money in multifolds.. And we fools instead of thinking to do something gud for the country continue doing gud for such ‘ money making guys,

…. A visitor of the Ashram.


The reality is that the proof that JKP is corrupt and Kripalu is sexually abusive, a child rapist, a thief, and a con man is right in front of your face — you just have to be able to see it.

UPDATE: Please take a minute to read a new comment on an old blog post. Today (April 10, 2013) Sobhuji wrote a very interesting comment about his first-hand observations in one of Kripalu's billion dollar ashrams.
Posted by Rishika (Karen Jonson) at 3:49 PM