RishikaXcult.com Is Alive! — and Re-Released Memoir Tells Even More Secrets of the Two Gurus Who Headed up an International Organized Crime Spiritual Cult

RishikaXcult.com Is Alive — and Back Online!

After being obliterated by a cyber-attack in 2013 — RishikaXcult.com is now back online — and ready to spill some secrets.

Read the updated version of my memoir, including five new chapters — Sex, Lies, and Two Hindu Gurus — Telling Their Secrets and Finding My Truth! 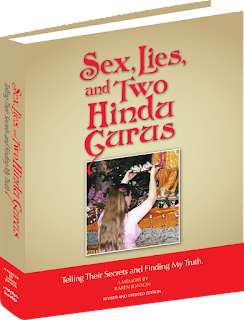 “All I’ve ever wanted my whole life was to find God. And now I think I’ve found the devil.”

That was the beginning of what would become a memoir of her life in the U.S. ashram of two Hindu gurus, called Jagadguru Kripalu Parishat.

Once thought to be gods incarnate, the “gurus” were actually conmen living secret lives, Karen learned. While running an international "spiritual organization," they were running an elaborate, secretive underground crime organization that included a “sex factory,” charity and money laundering scams, and physical threats and attacks. Her research also revealed that the fake gurus were molesting women and underage girls on a massive scale.

As a first-hand observer in the ashram, Karen knew she had to expose their crimes. So she started a secret life of her own — gathering and recording as many insider secrets as she could for the next 10 months, before one guru’s arrest for child molestation on April 25th 2008. Her journals became her memoir — Sex, Lies, and Two Hindu Gurus: Telling Their Secrets and Finding My Truth*.

Beginning in 2013, Karen’s former gurus began attacking everything related to the book. Their efforts included an attempt to get Amazon to ban the book from its virtual book shelves, a bid to remove the book’s video trailer from YouTube, and a DDoS cyber-attack on her blog with the same intensity used to bring down WikiLeaks.com.

Now, Karen is re-releasing her memoir with five new chapters. Along with stories about the gurus’ bedroom rituals, offering virgins to the gurus, and a criminal trial for child sex abuse, the revised edition of Sex, Lies, and Two Hindu Gurus also reveals:

·       How one guru escaped from Texas to India after being convicted on child sex abuse
·       The experiences of an underage girl raped by the head guru who sued the cult — and won
·       The suspicious death of the head guru — at the hands of his own people?

“Writing this book was the hardest thing I’ve ever done,” said Karen, “because I had to relive every single incident and re-tell every single secret I heard about two people who I once considered to be divine. Despite the personal pain I endured, I was compelled to share the truth to help others steer clear of this cult. During the process, I have communicated with many others who had been abused, including girls who were raped as minors. They told me the book helped them surmount their pain. Because of this, writing the book was worth all of the personal pain I endured.”

The updated release of Sex, Lies, and Two Hindu Gurus — Telling Their Secrets and Finding My Truth is available as a Kindle ebook and print book on Amazon everywhere outside of the India subcontinent.

On the India subcontinent, HarperCollins India released a version of the memoir in 2014, titled Sex, Lies, and Two Hindu Gurus — My Journey to Hell and Back.

* Note: The original title of Karen Jonson’s memoir was: Sex, Lies, and Two Hindu Gurus — How I Was Conned by a Dangerous Cult and Why I Will Not Keep Their Secrets.