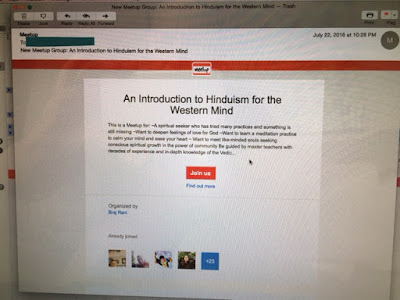 We already know that different branches of Jagadguru Kripalu Parishat have been working to create fake façades of being “yoga” organizations for the sole purpose of deceptively attracting new members who are interested in yoga. This despite the fact that JKP never was and still is not a yoga organization.

It is an organization dedicated to one and only one purpose — enticing humans to worship the accused rapist and serial sex abuser Kripalu Maharaj (aka Ram Tripathi). They do this under the guise of him being an “incarnation” of Radha Krishna, despite the fact that he studied under a tantric yogi in Chittrakut. But then he realized he could lure more innocent women and children into sex by pretending to be Krishna and telling them they were gopis.

Well, JKP “preachers” have a new scheme underway, which I just discovered this week. They are using an online meeting website as a way for JKP preachers to try and lure in new unsuspecting warm bodies and cash. On the Meetup.com website, people create all kinds of groups of like-minded people to engage in activities they’re all interested in, such as volleyball, art events, bicycling, and marketing.

These groups are not meant to be self-promotional, moneymaking enterprises. In fact, it is strictly forbidden to start a group that is “created for the sole purpose of soliciting or promoting a business, service, brand, product, or venue.”

·      It’s strictly forbidden to hide your intentions. Meetup policies include being honest with your “intentions” and “affiliations.” Well, we all know what JKP’s intentions are.

·      Groups must be “aligned with Meetup’s goal of building supportive and lasting group connections that foster shared community-building.”

·      Meetup groups that are primarily intended to promote or sell, rather than build member-to-member connections, are not allowed.

Does this sound like a community-building event or a moneymaking scheme to you? 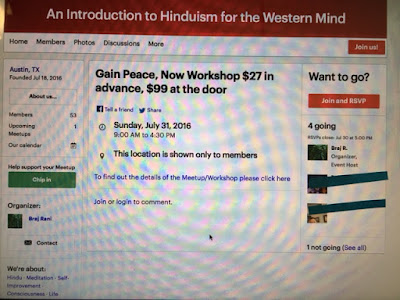 Then, just yesterday in the Austin Chronicle, I found an advertisement for the exact same event. It’s headed up by one of Kripalu’s preachers, Siddheshwari Devi. This is a woman who admitted to one of her former groups that she “had sex with Kripalu” and was also accused of having sex with followers. She was even impregnated by one of them. She claimed she was a sex addict. These events are well documented by her former people. I would be happy to share the documents with anyone who is interested.

Is this someone you want to entrust your pure soul to? 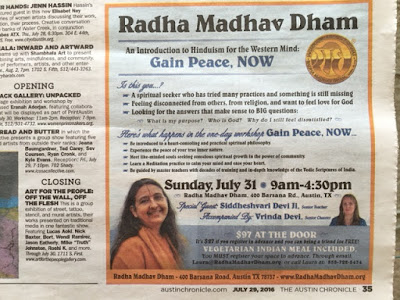 Further, Siddheshwari is accompanied by a long-time devotee of both Kripalu and the convicted child sex offender, Swami Prakashanand Saraswati (founder of the Radha Madhav Dham ashram), “Vrinda Devi” (aka Jenifer Deutsch).

This woman helped Prakashanand escape after he was convicted on 20 counts of child sex abuse in a Texas courtroom. The U.S. Marshals have records of her taking repeated trips to one of Prakashanand’s hideouts in Mexico, until he eventually escaped by merchant ship to India. Legally, this is called “aiding and abetting an escaped felon.” These points are well documented. I would be happy to share the document with anyone who is interested.

Regarding JKP preachers’ infiltration of Meetup, I did some further research and found some other groups. I have contacted Meetup to let the company know these groups are violating the site’s terms of agreement.

I feel certain there are other JKP-founded Meetup groups on there, as well. If you are concerned, please check in your area for any of these groups and notify the company. It’s very easy to do. Here’s how you report a group:

1.     When you are on the page of a particular group, click on the “More” link in the navigation.
2.     Choose the reason you are reporting the group, such as, “The focus is not on community.”
3.     You will then be given a chance to explain why you are concerned. Keep your message short, because you only have a certain number of characters.

I’m sharing this information for the purpose of informing people who may be fooled by JKP’s covert marketing activities. It’s what I would have wanted others to do for me when I was an innocent spiritual seeker looking for a pure spiritual group. But I found myself lured into JKP’s trap and ended up following two orange-clad conmen to the darkest reaches of maya.

Stay safe out there everyone. People, like my former cult’s members, with sketchy intentions are hiding behind glossy exteriors and trying to lure you into their “spiritual” con games.
Posted by Rishika (Karen Jonson) at 11:41 AM