How Many People Did JKP Kill This Time? We Don’t Know, Because Jagadguru Kripalu Parishat is on Lockdown — of the Truth

How many people have died in the past one and a half months since Jagadguru Kripalu Parishat held a three-day Super Spreader Event in Manghar, India, that attracted thousands (14,000!) of people from around the world — including the U.S., Canada, and Europe.

We know that hundreds got sick, and many died right away after the event, held March 13th to 15th, 2021. We know this because Balkrishna, Kripalu's younger son, didn’t get the internal memo that they weren’t supposed to tell anyone. He told many people.

But as India descended into a nightmare that news media are calling “a humanitarian disaster” and “Dante’s Inferno” (due to all of the dead bodies burning across India), JKP locked their gates and their lips, and went dark. Everyone inside the organization’s ashrams is forbidden to speak to anyone on the outside. Why? Because JKP doesn’t want the world to know how many people they killed this time.

Meanwhile, hundreds of thousands of Indian citizens have no vaccines, no medicine, no hospital beds, and no oxygen. They are suffering and dying. There isn’t even enough wood for the 24/7 fires burning for the dead. (Think about how much JKP could help humanity, their own countrymen, with its billions of dollars during this crisis — instead of making it worse.)

Didis Claim to Be Divine Beings — But Act Like Raakshas

How does it look to claim that you’re divine, to say that when you enter a JKP ashram you are entering Radha Krishna’s divine abode on earth — and then you get sicker than you’ve ever been in your life from a horrifying worldwide virus, where people are dying a painful, agonizing death? Sounds more like hell than heaven to me. A hell run by literal demons.

Hell is what the recent (illegal) event turned out to be — all just so that people could witness the inauguration of yet another building owned by JKP. This one is called Guru Dham (Jagadguruttam Mandir). How many buildings does JKP need exactly?

Also, people went to see the sick and possibly dying Bharti Didi one last time. (More on this in an upcoming post.)

Why did this happen? There are three reasons — all bad.

I’ve said it 100 times. ALL JKP cares about is getting as much of your money as they can possibly get their money-grubbing hands on. (Okay, they cared about bring women and underage girls to Kripalu, Prakashanand, and male preachers, too.) Their real business is extracting and hoarding massive amounts of tax-free cash from their followers. And if this selfish Super Spreader Disaster doesn’t convince people, then they can’t handle the truth.

Every single event held in any JKP venue is a money-making cash grab. Maybe you don’t pay for your room (tiny, hot, crowded) or food (cheap), but you do pay for every single activity — from watching them eat to participating in a parade. And we’re not talking a few rupees. For foreigners, we’re talking hundreds and thousands of dollars. (Cash only, please!)

Who in the world makes the conscious decision to travel across the country or around the world during a worldwide pandemic? That alone reveals the mental state of the people who traveled to JKP’s March 2021 Super Spreader Cash Grab.

Did these people think they were inoculated because their “guru” is the “supreme guru”? Or were they harassed by the three Didis or local preachers telling them they MUST come? Or are they just completely without an independent brain cell functioning in their head? Shame on you, if you went to this “humanitarian disaster.” And you say you love God? I say you are utterly selfish.

The followers who threw common sense precautions to the wind and traveled to Manghar for the three-day Super Spreader Cash Grab remind me of a person I saw on the U.S. news just as COVID-19 was expanding in the U.S. last year. A woman was driving into a church parking lot and a reporter asked the conservative Christian (evangelical) why she was going to a church event during a pandemic. The woman screamed at him several times: “I’m safe because I’m bathed in the blood of Jesus.”

I ask you, do JKP followers have a similar mantra? Are they bathed in the ______ (insert appropriate word here) of Kripalu Maharaj?

The following excerpt from an India news report confirms that JKP does not care about people, including its followers.

“Started on March 13 at Manghar, the event was organized by Jagadguru Kripalu Parishat with more than 14,000 devotees attending the meeting and flouting all Covid norms, despite the strict directives given by Chief Minister Yogi Adityanath to avoid public gathering with the danger of the state entering the second wave of coronavirus.

“As per sources, Covid protocols like wearing of masks, social distancing, temperature checking, and using of hand sanitizers were being blatantly ignored at the Ashram, resulting in thousands of people getting vulnerable to coronavirus.

“Devotees who have been tested positive for the virus have not been given any health assistance and have been asked to leave the temple premises.”

I was told by my source that the number who got sick and died right away after going to Manghar didn’t make it into the news, because JKP paid off the government and media to keep it quiet. (Just like they did hundreds of other times, including the rape case in Trinidad and Tobago.)

This reminds me of the time there was a stampeded at a Manghar event several years ago where hundreds died and were injured. What did Kripalu and his daughters do? They got out of there fast — sneaking out of the ashram in their expensive cars, and leaving the devotees to clean up the mess, including lying about the number of people who died.

How many people does JKP have to kill for their followers to open their eyes and face the truth?

Everyone Should Known Better

I don’t know about you, but I wouldn’t fly across the U.S. right now, let alone around the world during a worldwide pandemic — with worse forms of Covid-19 emerging all of the time.

Some people might forgive the organization and its followers for killing more people during a worldwide pandemic, saying something to the effect, “Well, India was doing well for so long. Better than the U.S. Daily cases were dropping.”

That’s true. However, on 12 February 2021, everything changed. Dramatically. Daily cases of Covid-19 began to rise across India. First slowly. Then more rapidly. Then just before the event, all hell broke loose — and the daily numbers spiked sharply, shooting straight up like a rocket in early March 2021 (see graph below). In one day, the number of people who got sick with coronavirus in India reached 200,000. I remember hearing about it on the U.S. news. Even the U.S. reporter being shocked. (It’s now up to 400,000 a day.)

In late February and early March, the India government put in place very strict rules regarding social distancing and masks, and banning public gatherings. Another rule required people coming into India from other countries to quarantine for two weeks before mingling with other people. How many of the JKP devotees do you think did that? My guess is precisely zero!

All this is to say that JKP should have canceled the event. There was plenty of time to see that the situation in the country was getting worse. If they truly cared about people, instead of callously only thinking about the piles of money they wanted to get their grubby hands on, people’s health and lives could have been saved.

Regarding their unquenchable greed, it should be noted that I reported over one decade ago the three Didis had already horded over $1 billion U.S. dollars in a “complex network of India-based trusts.” I don’t even know how much more they’ve stockpiled since then.

How much money to they need exactly? How much will be enough to satiate their lust for cold hard cash? After all, all the money in the world isn’t going to keep Vishakha (Bhardi Didi) from dying of cancer or heart failure or liver disease — if she doesn’t die of Covid-19 first? (More on her condition soon. And I’ve got another story coming on the current status of the so-called "divine family.”)

Below are two images from the tragic Super Spreader Cash Grab Event held for JKP in Manghar on March 13th to 15th, 2021 — where over 100 people got sick and many died right away, as well as untold numbers since then. Mind you, these are JKP's own PR photos, used here for education purposes. They want brag about the crowd that attended. They have no shame.

You can also watch this video and see how people weren't even being good about properly wearing masks.

One image is of the website of the JKP ashram in Austin, Texas, which has been closed to the public since early last year. I wonder how many people from Radha Madhav Dham went to the Super Spreader Event in Manghar. Did they bring the new version of the virus back to Texas with them? How many got sick? How many died?

If you know more information on this story and the Covid Cult, please let me know and I’ll share it with everyone. Unlike JKP, I actually care about people and their well-being.

UPDATE: As if everything I've shared isn't enough, I also found out that JKP closed down all of its hospitals and kicked out the patients and sick people. What kind of "hospital" does that? They are supposed to be treating people who have no other medical options. This is a time when India is out of hospital beds. But all JKP people care about it themselves. Here's what I know: The hospitals were built just for PR, so they could pretend to be do-gooders. If you believe that, you've been conned. 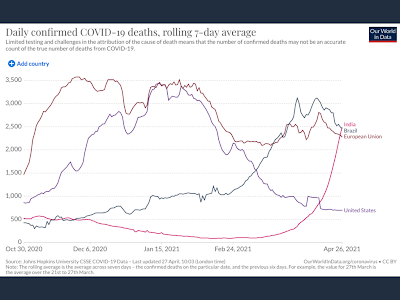 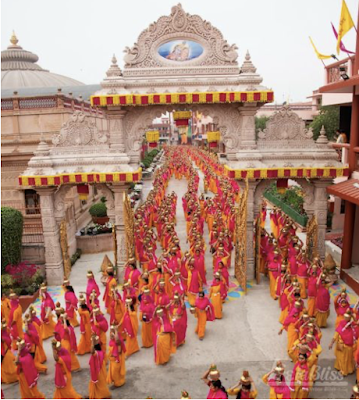 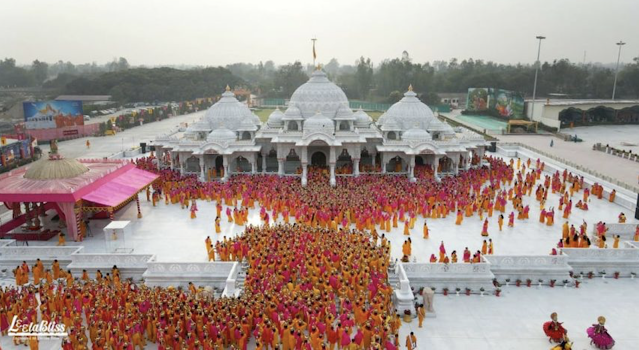 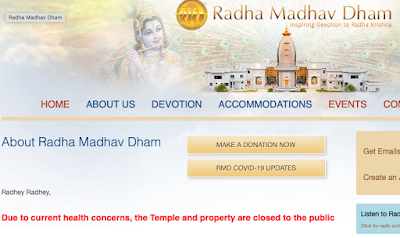