This is an update to my story about how the greedy three so-called "Divine Didis" (three daughters of Kripalu Maharaj of Jagadguru Kripalu Parishat) created a humanitarian disaster in the JKP ashrams — with many infected with the coronavirus and many sick and many dying.

Here is what my source has reported (all of this is information that JKP does NOT want you to know — they are working hard to hide the truth):

Initially, 105 people were found to be corona positive while the function was going on in Mangarh. After that they immediately told the people to evacuate the ashram.

The head of Shayama Shyama Dham in Vrindavan, named Suman, died in this week.

40 people in Mangarh are in quarantine now.

Every day in JKP ashrams 3 to 4 more people are testing positive for COVID-19. Everyone is scared out of their minds.

Almost 80% of the people in JKP ashrams are suffering from the symptoms like high fever, cold, and cough. They are being kept inside the ashram and are not allowed to see outside doctors.

In the Odisha ashram 10 people are positive. This week 10 people died of COVID-19 in different districts of Odisha — all of them attended that function in Mangarh.

Both of the main assistants of Braj Chakori, named Namdev and Bhagirathi, are coronavirus positive, along with 8 other people in Odisha ashram.

The hospitals in the ashram are not giving people any kind of reports after testing their blood or nasal swaps — out of fear that outsiders may find out details. They are not reporting the sick and dying. Devotees are just being told to lock themselves in their rooms.

Among all of the pain and suffering and death, guess what the three pseudo-divine daughters of Kripalu are up to? — they have fled from Mangrah to Vrindavan to hide out!!

If you have any information that I can add to this developing story, please let me know.

Also, I'm particularly interested to find out if devotees from the USA attended the event in India in mid-March. And, if they did, how many brought COVID-19 back with them to America? How many are sick? How many died?

This is all such very sad news for the devotees — they are delusional, but they in the grip of greedy and evil JKP overlords. They should know better, but they don't.

Please protect yourself during this nightmarish crisis that JKP has created in all of its ashrams.

Graph — updated image of the rapid explosion of COVID-19 cases in India. You can clearly see that cases began to spike straight upwards at the beginning of March. The 3 Didis had plenty of time to cancel the event — it was just another building opening. In fact, cases per day in India were 12,286. They more than doubled by March 12th, the day just before the event to 24,882. The governing body in India had already cancelled large gatherings at that point. But JKP didn't cancel, because they knew they would make millions of dollars off of the devotees. I hope it was worth it to them to make their followers sick and to kill them! 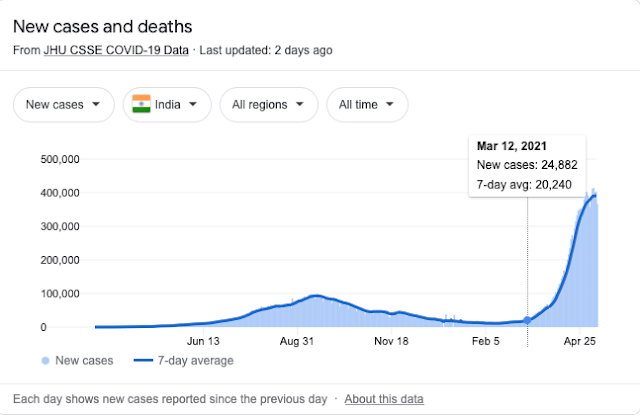