Do they have this expression in India: "Spilling the tea?" It means that you have heard some very interesting news (aka juicy gossip) and want to share it with others.

Well, I've got some tea to spill about the inner workings of Jagadguru Kripalu Parishat. I heard it all early last year from a very dependable source — and I have been sitting on it, because I wanted to do some follow up research. But now is the time to share.

I'll spill a little tea here everyday for the next few days.

What I have heard from a very good source is that she is, allegedly, acting like the Queen Bee now — and everyone is treating her the same way they treated Kripalu.

Apparently she sits on a singhasan, throne-type thing, and about a dozen servants are always at her beck-and-call.

One of my sources said: "Even for the slightest of things like drinking water people hold her glass. Even though she can walk, she acts as if she can’t and tries to walk like Amma."

You may recall I reported that right after Kripalu died, that I was told that Vaishakha and her two sisters (the evil triad) said: "It's all about women power now!"

Sounds to me like they were a little too excited about that prospect, perhaps.

Which is interesting, because another bit of tea I was told is that there is a rumor swirling around that Vishakha herself killed Kripalu. How interesting. I had heard and always thought it was one or both of the two brothers who handled Kripalu's money back in the day. But if people in India are saying Vaishakha did the deed, well, where there is smoke there is usually a fire.

My best guess is that maybe it was all three of them — maybe they created some plot together to off the old man. They certainly took a round about way of getting him to a hospital — plenty of time to let him bleed to death on a bumpy road from Vrindaban to some small hospital in the middle of the night.

They probably wanted the old man dead and gone because he had become an annoying liability (you know, after that whole being arrested for rape scandal, and all). I think the three sisters wanted to start being the Queens and to enjoy the billion dollars Kripalu raked in before they themselves kick the bucket.

After all, their name were already on the trusts where all the money was hidden — as a lawyer told me, "They have a complicated network of India-based trusts."

Speaking of which, yes, Vishakha has been very ill since the old man croaked. I've heard a few things — like cancer. My thought is maybe there is some karma in there somewhere, who knows?

By the way, this report is for educational purposes only — it's to help followers and guru shoppers know that all may not be as it seems on the surface at Jagadguru Kripalu Parishat.

(The talk about money reminds me of my next bit of tea I'll spill tomorrow.)

She doesn't look sick to me — is that the latest iphone? 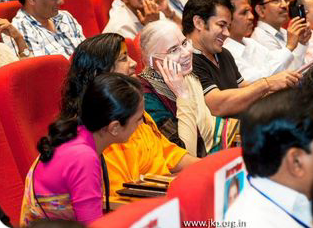