I meant to post updates to this JKP saga every day until I’ve covered all the new information people shared with me, but honestly, it’s so painful to think about these horrible people. I always need a recovery period. But, nonetheless, my dharma dictates that when I learn new insider information about Jagadguru Kripalu Parishat (JKP), I must share it — as a warning to the innocent. So here goes another “spilling the tea” update

I’ll continue with the two brothers — who, as I explained in my last post, only received a pittance when their father died (or was *cough* murdered *cough*). (The Three Greedy Didis pocketed a cool 1,000 million — $1 billion — which they never spend, because people keep giving them more money and paying for everything!)

As for Kripalu’s two sons, you can image they don’t think too highly of the Three Greedy Didis. In fact, the five siblings rarely have any interaction anymore, or so I was told by a dependable informant (aside from the three sisters, who are strangely glued at the hips for life).

One brother is in Bombay, where he lives in the house he was given when his dad died. He has a wife, one son, and one daughter. He is apparently giving lectures these days along with his son, although I don’t know exactly where. Apparently, he has little regard for the Three Greedy Didis, especially the lady-boss, Vishakha, who he says spends all of her time chasing after money — which I've already revealed. (Apparently, she doesn’t know his true feelings for her.)

(Also, I was told that this son, Balkrishna believes Vishakha helped kill Kripalu and he is totally against her and also against Kripalu’s philosophy.)

The other brother, Gyanshyam, lives in Vrindaban. Apparently, he opened his own little ashram called Maa Kripa Dham and give talks and chants there every night. I’ve been told that he often bad mouths his sisters and Jagadguru Kripalu Parishat as a whole under their leadership. Apparently, he still has regard for his dad, which is bizarre as Ram Tripathi (Kripalu) is the monster who started this whole sick, twisted, criminal con game. The sisters learned everything from him.

Gyanshyam has a website and Facebook page. It looks to me like he’s trying to imitate Kripalu in style and dress. I hope that he isn’t also a pedophile. (If anyone knows anything more about him, please let me know.)

Gyanshyam has three sons, but apparently no contact with them now, because — wait for it — the three grandsons support the Three Greedy Didis. In fact, I’m told that the whole focus in JKP now is on the eldest twin, Ramananda along with Vishakha. (Oh boy – all of the three grandson are as materialistic as they come based on firsthand evidence of their trip to Austin Texas — they participated in more worldly things and shopping in one month than I did in my whole 14 years there! Spending other people's money, of course.

I can only imagine why the grandsons are working side-by-side with the Three Greedy Didi. Is it because they are the ones with the megabucks — and, after all, who is going to get all that money when Three Greedy Didis die!? Certainly, JKP will never part with a single rupee to, for example, help the poor in India. I guess they love the power of being billionaires with ill-gotten gains.

Here is the whole Kripalu Gang of greedy materialistic thieves and sex offenders (and murders?) — some more evil than others (maybe an innocent one or two?). 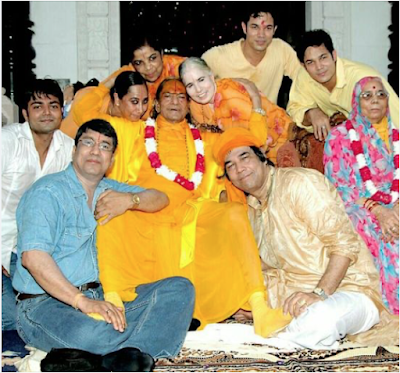 This report is for educational purposes only — it's to help followers and guru shoppers know that all may not be as it seems on the surface at Jagadguru Kripalu Parishat.