More on Vishakha — and the Band of Three Greedy Didis

At Ram Tripathi’s death (aka Kripalu), right away I believed it was murder. Now, apparently so do many followers. And they think the chief murderer was Vishakha, the oldest of three daughter of Kripalu — which naturally begs the question, why are they willingly following a murder? But then they willingly followed pedophiles, so ...

As promised, I’ve got more tea to spill today — and it’s all about the Three Greedy Didis.

As I mentioned in the last blog post, there’s been a general rumor going around that Vishakha is the person who is primarily responsible for Kripalu’s death — whether by her hand or her direction. Apparently, it’s now common knowledge throughout JKP, and believed by most people (even one of her brother’s mentioned it in a speech, I've been told). Allegedly, she had help pushing him down or something, such as from her own servants.

If true, he and her sisters, Shyama and Krishna, were likely greedy to get control of all the money. It’s estimated that Kripalu raked in about $1 billion US dollar once he got a bunch of rich westerners to hand over their loot.

Why do these people need so much money anyway. After all, none of them can ever spend it even in one lifetime. And they are supposed to be divine — that means spiritually focused, not materially. But their money con game just keeps running — and gullible people keep handing over the cold hard cash. Every. Single. Day. (I'm not exaggerating, based on what I've been told.)

Among their many money-making schemes is holding a couple of daily Zoom calls with about 200 wealthy followers around the world. In them, they primarily just ask for ... (wait for it) MORE MONEY for some new project or other — another statue, another mandala, another temple building. It. Never. Stops. They are as greedy and pushy about money as Kripalu was. (I was told a lot of Austin devotees attend these calls – what a bunch of suckers!) Not only do they ask for donation, but the calls themselves aren't even free. There's some $ticker attached to them as well.

Also, every day they post two or three videos of themselves living their lives — I can only imagine it's something like the “Daughters of Vrindaban,” ala the Housewives of Orange County. Can you image how boring that must be? And you get to pay $27 US a month for the privilege of being bored to death. It’s all on some paid website and paid app with monthly or yearly subscriptions, like Netfix or Hulu. But the only content is all about them. Excuse me while I yawwwwwwwn.

Along with be a recurring revenue source, the Zoom calls (and the donations they browbeat out of followers), are also how they keep devotees brainwashed — because they are controlling their minds just like Pavlov controlled the dogs in his science experiments.

But that’s not all, folks (as they say in the infomercial business – haha!), the Three Greedy Didis are regularly collecting small and larger sums from the zombie-like followers. They’ll gladly sell you a five-minute DVD for $2 or a half-hour video for $40. They charge for everything!!!

Did I mention that if you are local Indian resident, they will apparently ignore you? Allegedly they only care to spend their “valuable” time with the big fish — Western devotees and non-Resident Indias who are wealthy. Sorry the rest of you suckers, but you’re poor!

That’s all the tea I’m going to spill today. Tune in tomorrow for more juicy gossip — and it’s all free of charge. I won’t charge you anything. You for sure won’t find anything free anywhere near the Three Greedy Didis.

(This report, including content and images, is for educational purposes only — it's to help followers and guru shoppers know that all may not be as it seems on the surface at Jagadguru Kripalu Parishat.)

Look at them! Greedy as hell, for sure. Smug as can be. But murders? Maybe. (JKP devotees think so, allegedly — and are apparently fine with it.) 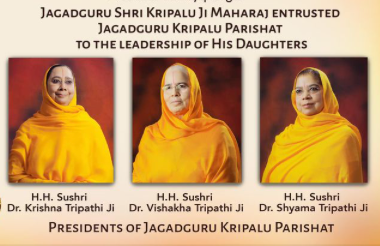