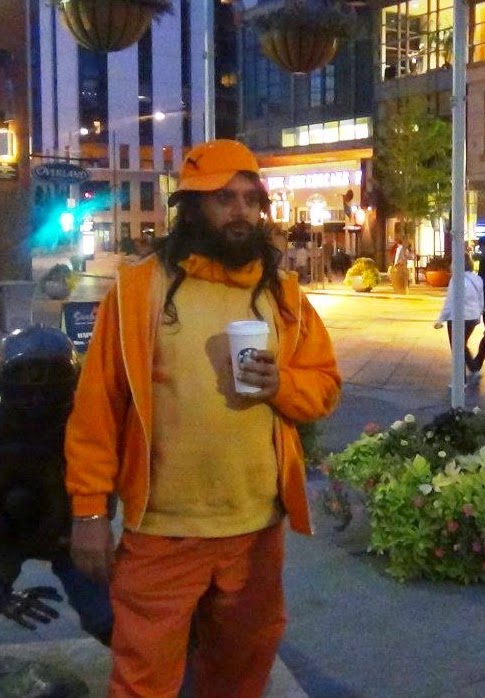 Swami Haridas of Jagadguru Kripalu Parishat in Nepal. What exactly is he doing in Radha Madhav Dham USA?

There’s a new swami is in town — and at the formerly named Barsana Dham ashram (currently called Radha Madhav Dham.) “Swami Haridas” heralds from Nepal and is one of Kripalu’s many preachers in the field working to bring him warm bodies and cold hard cash. He’s been in and out of Radha Madhav Dham over the past few months, and is running a two-day program this weekend.

But who is this “Swami Haridas” exactly? I had the chance to speak with a person in India who knows the truth about many of the so-called preachers of JKP, including this man. Here is the scoop directly from my source — please warn everyone you know:


“The actual name of Swami Haridas is Hari Pandey. He has only a primary school education. He made fake certificates of degrees to go abroad. He used to do property business helping people buy and sell real estate in Kathmandu. HE WAS A PLAY BOY.

“He started attending Kripalu’s satsang after listening to lectures of Parikari in Kathmandu. He was actually attracted to her appearance rather than to the devotion. Eventually he became attracted to another girl named Sangita Pandey of BhatBhteni, Kathmandu, who was a good singer. She used to sing in the satsang, and her whole family was involved in JKP. They began an affair.

“Then other satsangis from Kathmandu objected to their behavior on the train while going to Mangarh from Kathmandu in October 1996. Then they got married, as there was no other option other than that. They couldn't have child after marriage because Hari Pandey is defective. Also because of the nature of Hari Pandey they often used to quarrel, and I saw them quarrelling in the ashram in Mangarh as Hari was falling for other girls.

“As Hari Pandey was expert in convincing people for selling and buying properties, he used his talent for recruiting money for ashram and he succeeded. He didn't have his own house, or even any money to pay for groceries. There after he got to stay at the ashram of Kathmandu freely. He bought some properties by collecting money in the name of the ashram. He engaged most of the satsangis in Nepal and got lakhs of rupees. He then became close to Kripalu and took over the Kathmandu ashram.

“Naresh Harjani was looking after the ashram before him, and he took it over by kicking out the main doner, Mr. Bhawnani (who died recently in USA). Now there are two groups in Kathmandu and Nepal. Those who go to Kathmandu ashram. A second group who are supporters of Naresh never go there, but are directly linked to the Mangarh ashram.

“The main job of Haridas and his wife was to mindwash the new girls and get them ready to be in front of Kripalu (when he visits Nepal). I have also got to know that while convincing girls to have sex with Kripalu, Hari Pandey says: "If I had a women's body I would have RAS with Maharajji." Because of his full support for all evil doings of ashram, he was made a pracharak of ashram to preach in Nepal, and to worked to get more and more people of higher society, like media and judges, involve. After becoming preacher Hari Pandey became Haridas. His wife always travels with him in Nepal.

“Haridas also has sex with new girls. Young girls are his weakness. But he chooses only those who do are poor and materially weak, and long for a luxurious life.”


By the way, if you are wondering why Haridas is making trips to Radha Madhav Dham now, rather than Mukundananda, it’s because Prakashanand never liked Mukundananda, so he doesn’t want him taking over “his ashram” now. Despite his ability to charm some people, Mukundananda is not without sin either. He apparently also likes the ladies.

Please resist the urge to put these people on a pedestal, believing they are holier than thou. Not only are they as corrupt as Kripalu Maharaj, but also it takes very little to become a preacher in this organization. The people are chosen for their ability to spread the scam, not for any pure devotional qualities.

It’s no surprise at all that the people who represent Jagadguru Kripalu Parishat are dishonest and corrupt. What else could you expect of an organization where the leader is among the world’s biggest sex addicts, child molesters, and scam artists?
Posted by Rishika (Karen Jonson) at 11:35 AM