RishikaXcult.com Delivers In-Depth and Insightful Coverage of the JKP Cult — As Well As Inspirational Essays About Spiritual and Life Transformation 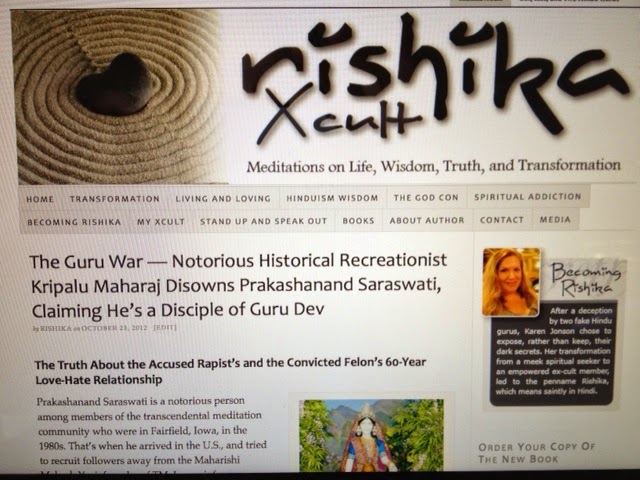 This Rishikaxcult.com blog, along with my book, are now the main sources for learning the truth about Jagadguru Kripalu Parishat. These are more sophisticated information delivery systems than The Truth Project for Barsana Dham and JKP on Facebook (which is now defunct).

In August 2010, I started a Facebook page called “The Truth Project for Barsana Dham and JKP.” I created this Facebook page to share the truth about JKP, Kripalu Maharaj, and Prakashanand Saraswati. Its purpose was to cut through JKP’s ongoing propaganda and lies — and share what was really going on.

I used the word “Project," because the page was just that: A project to share the truth with those who wanted to know it. The word “project” speaks to a specific task that has a beginning and an end. The beginning of my project was August 2010 and the end was August 2012.


The two-year project was a huge success — better even that I could have ever predicted when I started it with just a handful of followers. Here is what The Truth Project accomplished in just 24 months:

1. The Truth Project grew beyond my expectations, reaching people around the world who wanted to know the truth about Jagadguru Kripalu Parishat. The Facebook page had many likes, but many more people who regularly read it without clicking the “Like” button. Many of the followers contacted me privately with words of thanks, encouragement, and new insights into the truth about JKP.

2. The information I shared on The Truth Project helped many ex-devotees better understand the spiritual con game in which they had been trapped, and it made them feel less alone in the world. That was one of my main goals when I learned the truth about JKP – I wanted to give ex-devotees a sense of solidarity instead of isolation. I’m happy to report that The Truth Project helped accomplish this goal.

3. Thanks to The Truth Project, I made several significant connections with JKP insiders, who had information to share with me. Some of that insider information changed the course of history at JKP for good – including being able to catch Prakashanand in Austin in early October 2011, when his lawyers were telling Hays County prosecutors that he could not fly from India to the U.S. due to illness. (Note: All of my contacts shall forever remain anonymous, unless they wish to reveal themselves.)


The Truth Project accomplished so much. However, it was a “Project” as the name implied. And now it’s time to take the Project to the next level — in my book and my blog.

For one thing, while Facebook is an acceptable general social media avenue, it has several serious flaws, including the fact that it is not a dependable vehicle to reach people. This flaw became even more pronounced last summer. Simply stated, Facebook only delivers page updates to about 10% of the people who “Like” a page. The reason for this low delivery percentage is that Facebook wants to charge people a fee to reach 100% of the people who “Like” each page. These costs are prohibitive for the average small business and non-profit, like myself.

A better, and much more sophisticated, way to reach 100% of the people who want to receive specific information is through a blog. The people who sign up on blogs will receive the updates 100% of the time (unlike on Facebook).

After contemplating Facebook’s disadvantages, I chose to move The Truth Project to my existing blog. I own this site, so sharing information is now under my control, versus under the control of Facebook.


Many of the regular readers of The Truth Project were upset when it abruptly disappeared. I had notified the people who “Liked” the page of an upcoming change, but I had no way to notify the people who had never clicked the “Like” button. (At the time, I was mulling over changing the name of the page, since Barsana Dham ashram’s name had been changed to Radha Madhav Dham after Prakashanand escaped. But then I made the decision that my blog would be a more dependable delivery medium.)

After the page went down, I was very touched when so many people reached out to me, worried about what had happened to the original The Truth Project on Facebook. The primary reason for their distress was that JKP had immediately taken over the name and created a fake Facebook page. My supporters were concerned both about me personally and about the future of The Truth Project. I explained to them individually what had happened.

The bogus Facebook page is administered by someone with a fake name — apparently he or she is too ashamed to use his or her real name. There are allegedly many followers to this artificial Facebook page. However, JKP has another Facebook page, which is in support of Prakashanand. That page is administered by a man in Ireland, named David C., who is in his early 20s. Interestingly, the statistics for that Facebook page reported that the greatest concentration of people who “Liked” the page were people from Ireland in their early 20s. What this tells me is that David himself made up a bunch of fake Facebook pages, which he then used to “Like” his page. I assume the same is happening with the bogus Truth Project.


RishikaXcult.com is Already Attracting Many Followers


Already my blog, Rishikaxcult.com, has attracted many people who have signed up to receive regular updates. I’m hoping to expand membership to others who want to know the truth about the JKP cult, better understand cult tactics in general, and gain inspiration after living through a traumatic experience. The essays about transformation will celebrate our journey on this planet as both spiritual and physical beings.

Along with my blog, I have also published a website for my memoir, www.sexliesandtwohindugurus.com. I also maintain two Facebook pages for people who prefer to get updates on that social medium: Rishika Xcult and Sex, Lies, and Two Hindu Gurus. I know that those who want to find me will definitely find me — and when they find me, they will find the truht.

That is the whole story of The Truth Project for Barsana Dham and JKP — now and forever a book and a blog!

I hope to hear from you on one of my sites. Also, I’m always available by email at rishikaxcult at gmail dot com.

Best wishes to everyone! Thank you for reading and caring.

Karen (aka Rishika)
Posted by Rishika (Karen Jonson) at 12:20 PM