Fools or Foolish? — While Thousands of Young Girls are Lured or Forced into Kripalu’s Bedroom, this Foundation Hands Jagadguru Kripalu Parishat Another Tool to Play its Con Game 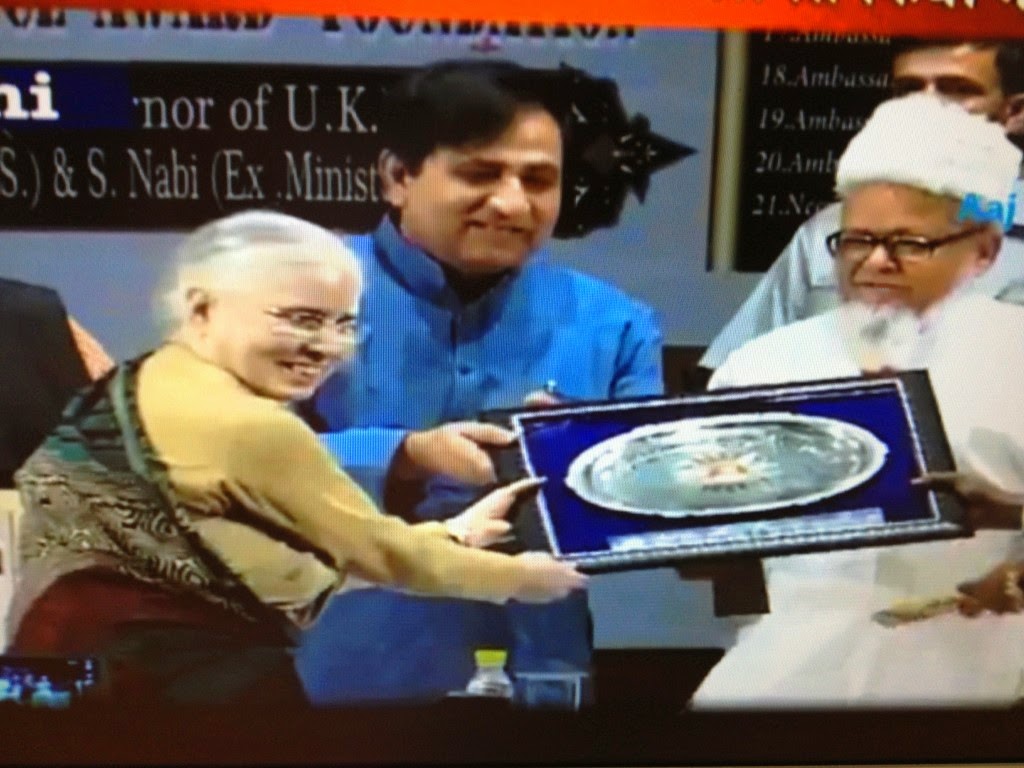 Vishaka Tripathi, Kripalu Maharaj's daughter, receiving the "award." She is playing a big role now in winning political influence in India to make all the various criminal charges and complaints go away. Within JKP, she is called a "divine being," and is said to be the incarnated "Vishaka gopi" -- one of the eight personal aids of Radha (of course, Kripalu is said to be Radha Krishna in the flesh).

Why would the Rajiv Gandhi Global Excellence Award give an award to a known child rapist?

Then two miracles happened: The widespread availability of the Internet in the 1990s and Kripalu’s arrest for raping a young girl in Trinidad in 2007.

These two events worked together to produce volumes of information previously unavailable to people around the world about the dark secrets of Kripalu and his organization, Jagadguru Kripalu Parishat.

So there is no longer any excuse for claiming ignorance.


Today a light is shining on Kripalu’s dark secrets. And yet many people look away from the truth.

So it leads me to wonder: Why don’t organizations like this one do their due diligence and find out whom they are giving awards to?

Fooled or Foolish? How would you define Rajiv Gandhi Global Excellence Award Foundation?


I asked my questions to some people who know JKP all too well — and here’s what I learned.

There is a devotee in JKP who is an active member of Congress party in New Delhi, and he is the main helper behind getting the Rajiv Gandhi Excellence award.

Further, there are several cunning people in Kripalu’s gang — seven whose names I know (and will happily share with the authorities), plus the three daughters of Kripalu — working diligently to involve more and more party leaders into their organization.

Why is this important to JKP?

Only one reason: To gain influence to get all of the many legal cases and complaints against Kripalu dismissed — including rape cases (that the public does not yet know about) and also Prakashanand Saraswati’s criminal case from the U.S. (He is currently in hiding and under the full protection of JKP.)

JKP ashrams have been raided by the CBI, but everyone living there is well versed in how to make sure nothing bad is found — they lie and (in the case of underage girls) they hide.


The Real Reason Kripalu Started a School for Girls


As regards Kripalu’s “school for girls,” many people who know the truth know exactly why he chose to start a school for girls — he is obsessed with young girls.

He has raped thousands of them from all over the world. (Remember, that the outrageousness of Kripalu’s crimes is one of the main reasons blind people won’t believe the truth.)

It’s for that very reason that, at the last minute, he didn’t go to Fiji and New Zealand on his so-called “World Tour” in 2007, even though he and his whole gang already had plane tickets — because his gang heard that he might be arrested for raping underage girls from those countries.

Having a school has given him easy access to more young girls for years.

Since Kripalu’s arrest for rape in Trinidad (a case that mysterious “disappeared” after Prakashanand Saraswati, Kripalu’s faithful servant of fifty-plus years) flew to Trinidad with several large checks), JKP started saying it was all about “charity.”

However, up until then the only so-called charity it had done was the girls school. And clearly that was for ulterior motives. (Proof of this is that JKP never used to promote it — because why promote something created for the wrong reasons?)

All the Rajiv Gandhi Global Excellence Award Foundation has accomplished is given a very corrupt organization another tool for luring in people and conning them of their money, lives, and dignity. It is helping JKP’s unscrupulous members to collect more cash and its perverted men in orange to have more illegitimate and illegal sex.


JKP wasted no time is publishing the news. Here is how JKP is already bragging about this award from a press release — and using it for propoganda:


“The institution, managed by the followers of Jagadguru Kripaluji Maharaj, was especially recognised for its effort on education in the remote village of Mangarh in Uttar Pradesh that is now an inspiration for many similar endeavours nationally, a statement said.”


Do you know what happens in Mangarh?

That is a village basically owned by Kripalu. And those who know say there is not a single woman or girl living there whom Kripalu has not molested.

Who could stop him in a remote, poor village?

Knowing him as I do, I completely believe this — and feel so sad that JKP has been handed another tool to play its con game and hurt more people.


I welcome — and will publish — a response from the Rajiv Gandhi Global Excellence Award Foundation, should they wish to provide the people of the world an explanation for this travesty.